During an online episode of the sublime opinion show Last Week Tonight with John Oliver, the forthright host made mention of what the Pringles mascot (Julius Pringles) looks like from the neck down when talking about a particularly frustrating news interview.

While Oliver’s remark was made in passing, fans on Twitter took notice and posted illustrations of how they imagined what the rest of the Julius Pringle might be. An overwhelmed Oliver returned from hiatus to talk about the incredible responses he received and to challenge Pringles to reveal Julius’s body for the first time.

With the help of viewers at home, John tries to get to the bottom of an important mystery. 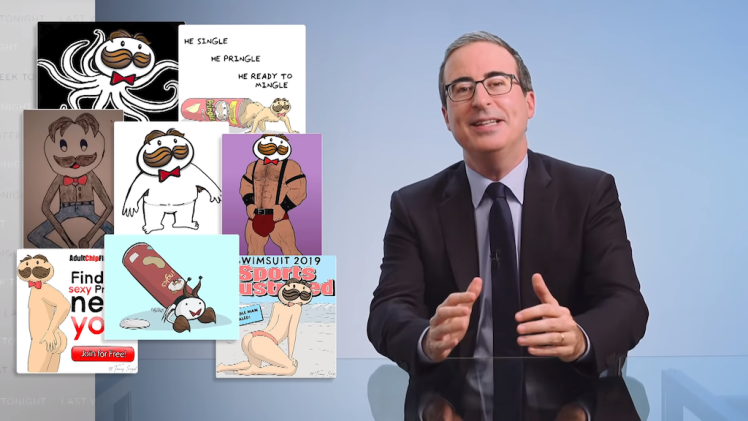 Oliver also stated that he would donate $10,000 to Feeding America if the company behind Pringles answered his question.

We will donate $10k to @FeedingAmerica if @Pringles finally tells us what the Pringles guy's body looks like. The people need to know! pic.twitter.com/C3L5B2CORi

I know so much useless information about Pringles but not the one thing that I really want to know, which is what is Julius Pringles working with from the neck down. Do I need to know this? No, I don’t. Do I want to? Yes very badly so much so that I’m willing to give ten thousand dollars to Feeding America if Pringles answers my question.

Pringles not only responded to Oliver but also pledged another $10,000 to this incredibly worthwhile cause.

Challenge accepted @iamjohnoliver. It's been a hot minute since Mr. P has made a public appearance and he’s actually got a new look. He'll be ready for his full body debut tomorrow. https://t.co/orHchjaIuc

The moment @IamJohnOliver and @LastWeekTonight have been waiting for. In honor of every second John has thought of Mr. P's body, we are donating $1 to @feedingamerica, which happens to be $10K. pic.twitter.com/Ori2jKJ8fz