In April our friend the amazing artist Tom Kennedy died in a tragic downing accident at Ocean Beach in San Francisco. The Ripper Journey Foundation has been established in his memory and a three-part art auction fundraiser will take place from October 28th through November 12th at the Jellyfish Gallery in San Francisco.

Friends and family of the legendary San Francisco artist Tom Kennedy will host a three-part benefit and art auction to benefit the Ripper Journey Foundation beginning October 28 and running through November 12 at the Jellyfish Gallery in San Francisco. The public is invited to participate and attend free of charge.

Tom Kennedy passed away April 12, 2009 while body-surfing off Ocean Beach in San Francisco. He left behind a legacy as a pioneering sculptural artist, social agitator and builder of more than twenty art cars. As a founding member of the art car movement, his works of art work evolved into symbols of political protest and peace keeping. Tom envisioned his beloved and most recognized art car, Ripper the Friendly Shark, traveling around the world with a crew called the Friend Patrol. Together they would inspire and support friendship and peace in conflict zones where people perceived as enemies live and work together. The art auction will raise money to send Ripper the Friendly Shark on this mission at least once a year.

The three-part fundraiser will kick off on October 28 with a silent auction and live performances and wrap up on November 12 with a live auction. An ever-growing list of artists have donated artwork to be auctioned with all proceeds to benefit the Ripper Journey Foundation.

The event will also showcase photos, art and videos about Tom Kennedy and the Ripper Journey Foundation created in his memory. All pieces in the silent auction will also be online at tomkennedyart.com.

Everyone MUST wear a hat.
Main Act: Tom Jonesing + more entertainment to be announced.

The Ripper Journey Foundation was created by the friends and family of Tom Kennedy to make his dream come true: to send his first art car Ripper the Friendly Shark around the world inspiring and supporting friendship and peace. By raising money the Foundation will make it possible for the Friend Patrol to accompany Ripper the Friendly Shark on at least one journey per year to conflict zones where people perceived as enemies live and work together in the name of friendship and peace. For more information go to: tomkennedyart.com 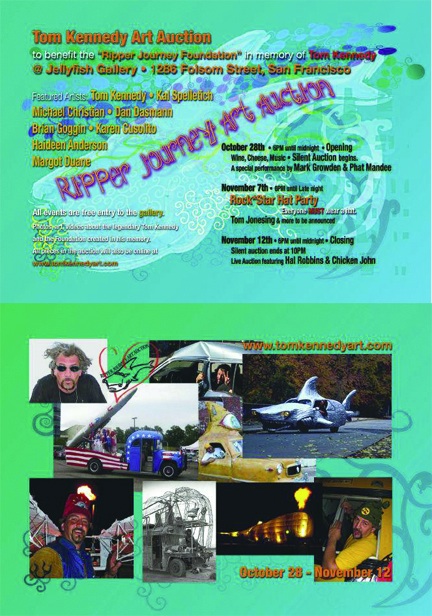