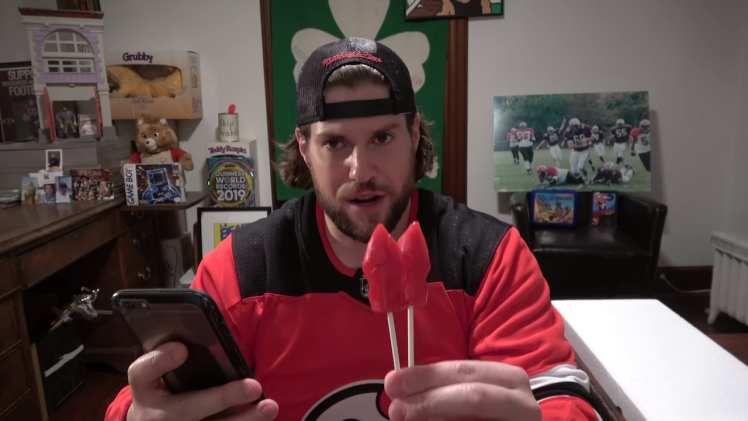 After unsuccessfully attempting to fit his body into several oversized balloons, competitive eater Kevin Strahle, aka “L.A. Beast” (previously), instead decided to test his stamina again, with another spicy challenge. This challenge features the Flamethrower Candy Company Toe of Satan Lollipop, which has a Scoville heat unit rating of 9 Million. The rules require that the participant keep the lollipop in their mouth for five minutes straight. Despite the fact that he’s allergic to cinnamon, Strahle upped the challenge for himself by sucking on two of fiery pops at once.

The Toe of Satan created by the Flamethrower Candy Company is so spicy that it is made with 9 Million Scoville Heat Unit Chili Extract. To put that into perspective, it is 900 times hotter than a Jalapeno. After ordering The Toe of Satan 2 years ago, the L.A. BEAST stumbled upon them after opening up a moving box and decided, “What the Hay! Let’s Give It A Whirl.” Long story short, The L.A. BEast made a terrible life choice.