Thought leader and speculatist Troy Hitch has vowed to wear an Oculus Rift virtual reality headset for all of 2015. Hitch explains why he wants to do this in a post on LinkedIn, and explains how the experiment will work in a post on his personal site.

Hitch acknowledges some challenges associated with this plan and lists “lack of intimacy,” “actual sight,” “mobility and publishing,” and “boredom” as problems he and his team have already addressed. Other challenges, like showering and basic hygiene, Hitch is either ignoring or says will be addressed in future updates.

The experiment began at The 2015 International Consumer Electronics Show (CES) and Hitch, has been tweeting about his experience there while wearing the Oculus Rift.

Hitch was one of the creators of the extremely popular web series You Suck at Photoshop, a series of comical instructional videos about photo editing.

As a thought leader, speculatist and acclaimed thought leader, I have a professional obligation to experiment with technology and pioneer the digital wilds. Over the years, I’ve learned that it is only when I am completely connected can I assimilate the most important information so that I may most effectively disseminate it to you. So, I’ve made one very deliberate New Year’s resolution this year: to become a more connected digital citizen. And to that end, I’ve committed to continuously wear my Oculus Rift Development Kit throughout 2015. 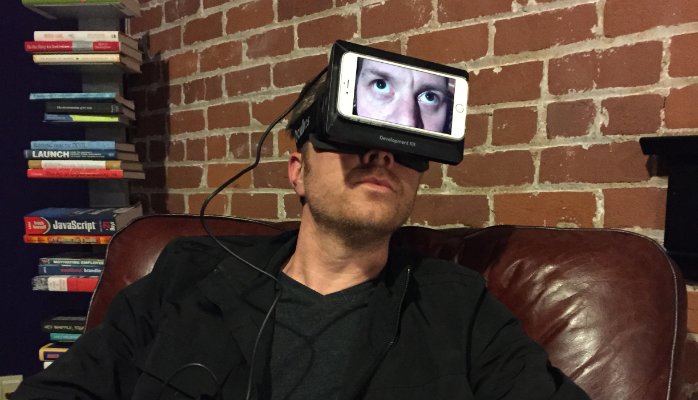 Not sure where this industry party was last night. Or where I am now. #CES2015 #MyYearContinuouslyWearingOculusRift. pic.twitter.com/LqEjkYQPWy

I do not think I’m being taken into the keynote speakers’ green room. #CES2015 #MyYearyContinuouslyWearingOculusRift pic.twitter.com/b0dJ9UIRqC

Can anyone who has me on Find Friends tell me where I am? Little help. #CES2015 #MyYearContinuouslyWearingOculusRift