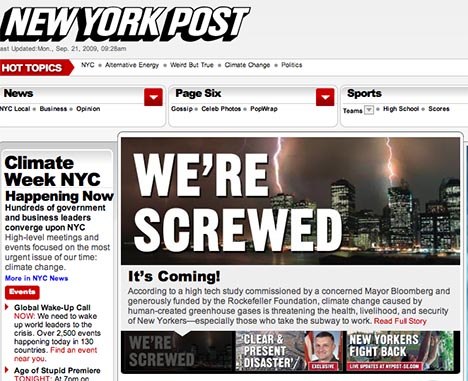 Activist pranksters The Yes Men have created a fake version of The New York Post with the headline “We’re Screwed” and an overall theme of climate change. This morning over 2000 volunteers have been distributing copies of this “special edition” paper on the streets of New York City.

Early this morning, nearly a million New Yorkers were stunned by the appearance of a “special edition” New York Post blaring headlines that their city could face deadly heat waves, extreme flooding, and other lethal effects of global warming within the next few decades. The most alarming thing about it: the news came from an official City report.

Distributed by over 2000 volunteers throughout New York City, the paper has been created by The Yes Men and a coalition of activists as a wake-up call to action on climate change. It appears one day before a UN summit where Secretary-General Ban Ki-Moon will push 100 world leaders to make serious commitments to reduce carbon emissions in the lead-up to the Copenhagen climate conference in December. Ban has said that the world has “less than 10 years to halt (the) global rise in greenhouse gas emissions if we are to avoid catastrophic consequences for people and the planet,” adding that Copenhagen is a “once-in-a-generation opportunity.”

Although the 32-page New York Post is a fake, everything in it is 100% true, with all facts carefully checked by a team of editors and climate change experts.

Last December The Yes Men created a fake version of The New York Times with the headline “Iraq War Ends”.