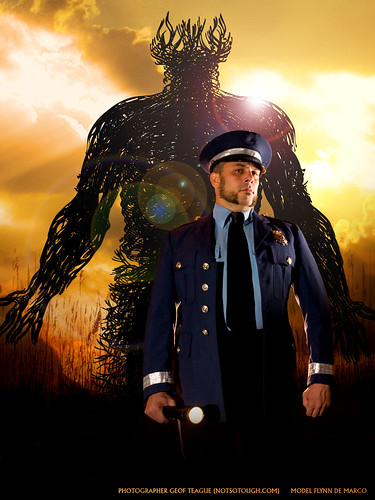 After suffering a predicatably soulless remake starring Nicolas Cage in 2006, the beloved 1973 cult horror film The Wicker Man was ripe for a more entertaining adaptation.

That adaptation arrives this week, in the form of The Wicker Man: A Rock Opera About The Ultimate Sacrifice. Created by notorious San Francisco underground theater artists, Cameron Eng and Sean Owens, as part of their series of “Foul Plays”, The Wicker Man stars Flynn DeMarco, Steffanos X and Maura Sipila, and features an original music score by Jim Fourniadis and LIVE EVIL. Also keep an eye out for Laughing Squid guestblogger (and Man Of 1,003 Faces) Mikl-em, who performs in several roles.

April showers bring the sanctimonious Sergeant Howie a mysterious letter concerning a missing girl from Summerisle, the tiny pagan island commune renowned for its bountiful produce and unabashed holy day rituals. His investigation of the restless natives proves as fruitless as last year’s crops, though; and the bizarre inhabitants only serve to add fuel to the flames of his righteous indignation. Driven to save the girl’s immortal soul from this den of idolaters, he discovers the truth behind the girl’s disappearance—that come May Day, the villagers intend to sacrifice her to their gods of the field to ensure a successful harvest. Howie must infiltrate their festivities, find the girl and escape—but will his plan put him out of the frying pan and into the fire?

The Wicker Man: A Rock Opera About The Ultimate Sacrifice opens this Thursday, October 2nd at The Dark Room. It runs through October 25th.