Damien Echols, Jason Baldwin and Jessie Misskelley, Jr., collectively known as the West Memphis Three, have been released from prison today, ending 18 years of incarceration for an Arkansas triple murder the three men insist they did not commit. The men were convicted in 1994 of murdering three eight year old boys in a satanic ritual the year prior, based on controversial evidence and confessions–DNA tests would later fail to link the trio to the murders. Today, in a plea deal, the three have been released based on time already served (Baldwin and Misskelley had been sentenced to life in prison, and Echols was on death row). 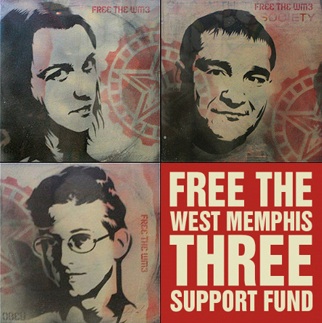 For more information on the West Memphis Three, visit their support fund page, follow the WM3 Twitter for live updates, and see their article on wikipedia. Two HBO documentaries were also created about the case: Paradise Lost: The Child Murders at Robin Hood Hills and Paradise Lost 2: Revelations. A third documentary Paradise Lost 3: Purgatory premiers in September 2011 at the Toronto Film Festival and will air on HBO in January 2012.

Here’s videos of the public hearing for The West Memphis on August 19, 2011.

We’ve written about the West Memphis Three since the early days of the Laughing Squid blog: