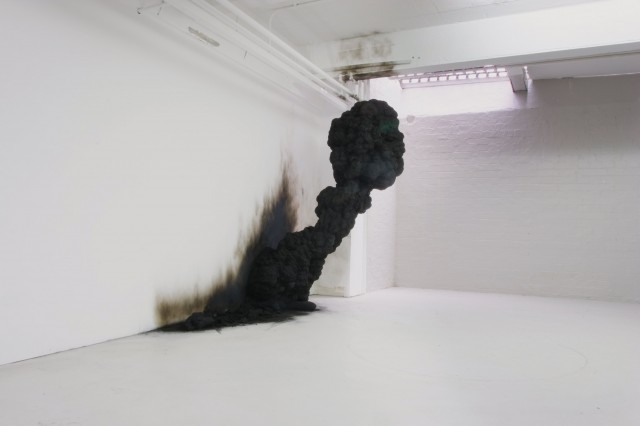 Belgium’s BOZAR Centre For Fine Arts, Brussels recently hosted the exhibition The Power of Fantasy: Modern and Contemporary Art from Poland which included this remarkable piece by sculptor Olaf Brzeski, Dream – Spontaneous combustion (2008) courtesy of the Czarna Gallery of Warsaw in his native Poland. A resin sculpture of a column of rising black smoke is accompanied by the physically charred walls and ceiling of the gallery itself.

Here’s a short video on the exhibition, which closed on September 18th; there’s a lot of great work.

Divided throughout the 19th century, occupied during the Second World War, and subsequently under the Soviet yoke for decades, Poland became a democracy in 1989. In this wounded country, victim of a succession of oppressive regimes, there developed a flourishing culture that gave expression, down the centuries, to a spirit of resistance to any order imposed from outside. Via the absurd and the fantastic, Polish artists reacted to the chaos of the real world with art imbued with a spirit of resistance, not in order to flee reality, but with a view to reconstructing it. The exhibition will show the work of internationally renowned contemporary artists, including Miroslaw Balka, Monika Sosnowska, and Wilhem Sasnal. Their works will be juxtaposed with seminal Polish works of art from the 19th and 20th centuries. Seeing these works side by side brings home just how deeply rooted the exploration of the fantastic and the irrational is in Polish art.

This longer “making of” video for the exhibit has some great footage including the instalation of Brzeski’s “Spotaneous Combustion” piece (at 10 minutes into the video).

More on the exhibition from the Polish site Art & Psyche.