The Bus Further tripped around San Francisco Monday afternoon… did you see it?

Can you, did you, or would you even consider passing the Acid Test? It is a question posed over 45 years ago by the Intrepid Traveler and his Band of Merry Pranksters. Ken Kesey, Ken Babbs and their audaciously creative friends embarked on a mission to find the “Cool Place” in 1964. They loaded up a 1938 International Harvester school bus with audio and film gear. They painted the Bus in psychedelic swirls and wrote FURTHER on the front and WEIRD LOAD on the back. The Merry Pranksters riffed and raffed around the United States documented by Tom Wolfe’s book “The Electric Kool Aid Acid Test“. 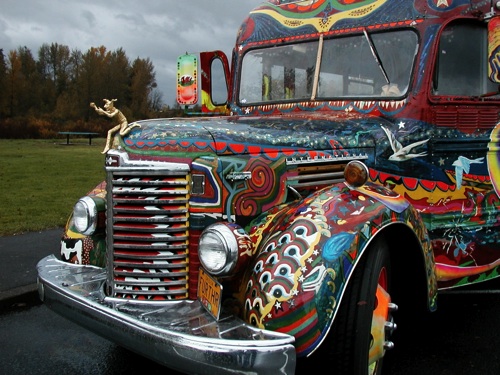 After that first long, strange trip, the Pranksters moved the fun to the great state of Oregon which has since been home base. The Merry Pranksters spawned dozens of kids and grand kids who grew up in the most creative, enthusiastic and positive environment imaginable. Neal Cassady, Jerry Garcia, and Ken Kesey may be gone… but we’re not! Ken Babbs is still in Oregon writing a new novel and cavorting online at the SkyPilotClub. Kesey’s son Zane manages the Bus Further Two and the original Bus Further that reside on the family farm. His son is a world class chess champion. The Kesey and Babbs families’ Merry Prankster offspring along with a bevy of other Prankster offspring are in San Francisco for The Dead Shows at Shoreline. The Offspring are conducting an “Acid Test” at the Mission Rock Cafe Tuesday, May 12 with The Everyone Orchestra, Steve Kimock and Melvin Seals and the Jerry Garcia Band. Are you a Merry Prankster? It’s Coming Around!