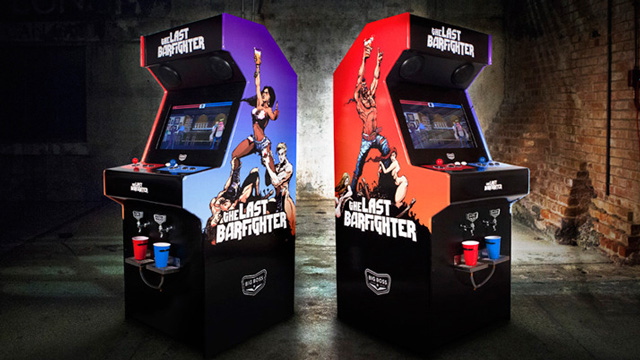 “To the victor goes the pour.”

“The Last Barfighter” is a “beercade” arcade video game machine developed by employees of Durham-based ad agency McKinney for Ten Percent, a program where they can “spend 10 percent of their time to come up with innovative projects of their own.” The game itself is a take on the fighting game, Street Fighter, but is notably different because when you beat your opponent, you receive a beer that is poured from the machine itself. It was commissioned by Raleigh beer company Big Boss Brewery.

What’s more memorable: sampling a beer poured by a bartender, beer rep or festival worker, or sampling a beer poured from a video arcade machine after you defeat your pathetic opponent in a game called “The Last Barfighter”? Everything about the Big Boss Brewery Beercade was handcrafted in-house at McKinney — from the classic arcade-inspired frame construction to the typographical styling and illustrations to the video game itself. It takes beer trial from forgettable smell-and-sip to memorable gloat-and-guzzle.