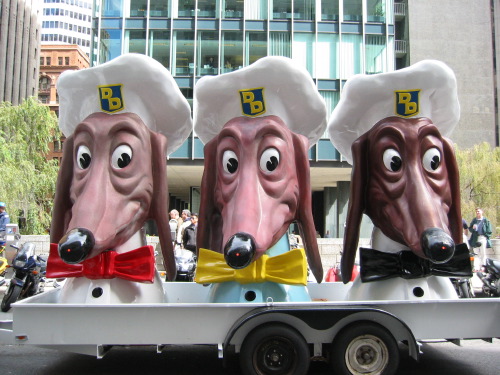 Harold Bachman, creator of the wonderful Doggie Diner dog head, passed away last Saturday in Santa Rosa at the age of 84. Harold designed the Doggie Diner icon in 1965 for the now-defunct Doggie Diner resturant chain. The 3 doggies, Manny, Moe & Jack, of the Holy Dogminican Order are really going to miss the man that brought them into this world. Zippy the Pinhead, who really loves the Doggies, must be a little sad now, as we all are. The dog heads have been featured in the Zippy comic strip for years, including once with a reference to Laughing Squid when we took the dog heads cross-country for our big show in NYC. It’s good to know that Harold’s creation will live on to make people smile and of course compel them to walk up and touch the nose!

I had the great good fortune to meet Harold Bachman thrice. The first time was a very brief greeting beneath the Dog Head at the Carousel restaurant at Ocean Beach. It was there I learned Mr. Bachman was the designer of the Doggie Diner visage we have all come to know: most to love, some to vaguely fear, all to undeniably recognize.

I met Mr. Bachman a second time a few years later at a ceremony honoring him and his industrial strength icon sponsored by the City of San Francisco. I had rolled out the three Dog Heads that I, through luck and some sort of bizarre divine decree have been appointed Steward for. I keep them on a trailer and roll them out for important occasions such as the annual St. Stupids Day parade or, perhaps a Polkacide (punk polka band) show.

We shot some pix of the creator leaning alongside the nose of Manny, or was it Moe or perhaps Jack? — anyway, one of the three. I had the opportunity to question him a bit about his feelings regarding his best-known creation. He seemed a bit perplexed, though entirely pleased by all the hoopla surrounding his long ago commercial art creation. The one thing that struck me most about this gentleman was, just that. He was a gentleman in the best old-fashioned sense of the word. He was gracious, charming (in a completely unassuming fashion) and modest. In age and demeanor he was a member of my fathers generation; the greatest generation. survivors of The Great Depression, WWII, men taking care of business, no whining, support the family, get the job done & move on. He was bemused and perhaps a little confused by the interest of the various kooks (myself included) that had adopted his creation as a mascot of sorts. It’s such a grand thing that â€œseriousâ€ interests (mayors office, art commish, etc.) had taken note of his creation as well or perhaps he would have written off all the noise.

My impressions of Mr. Bachman were solidified when I and my cinematic partner Flecher Fleudujon drove up to Santa Rosa to interview Mr. Bachman for our feature documentary Head Trip a chronicle of an SF to NYC roadtrip with a bus load of Frisco freaks and the three Dog Heads in tow. We met Harold’s son Rick and heard some of the family stories. The familial regard and love for this octogenarian graphics artist was very strong and clear. We noted as we perused his stacks of commercial art portfolios that Harold, the ever doting dad used a gangly pre-teen Norman Rockwellish Rick and his sister as models for many of his cheery, professional art pieces, some advertising bread, some beer.

Also in the master commercial artists portfolio were great pieces from the 50s, some just a wee bit risqué, advertising upcoming engagements by burlesque dancers such as the immortal Tempest Storm and the lovely Lily St. Cyr. Mr. Bachman got a little gleam in his eye while showing these pieces, but being the perfect gentleman had, with the exception of comments regarding their professionalism and artistic dignity, naught to say regarding these sirens from the past who had modeled for him.

It’s a testament to the still unique and magical essence of San Francisco that an artist such as Harold Bachman would be recognized for such break-out creative work. He considered himself a pro just doing his job. It is a true wonder informed by a little bit of cosmic justice that he was able to experience the genuine appreciation of a sincere (if just a bit goofy) public for one of his long ago unique creations.