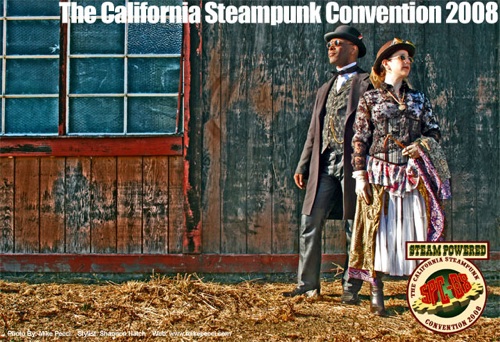 The California Steampunk Convention 2008 takes place October 31st through November 2nd at the Domain Hotel in Sunnyvale, CA. The event includes a Steampunk costume contest, The Steampunk Ball and the Party at the Center of the Earth featuring Steampunk band Abney Park.

Imagine a world where steam power and clockwork mechanisms are the cutting edge of technology! A neo-Victorian setting, with Charles Babbage’s great Engine running calculations, inventors competing to outdo each others’ greatest works and Ferdinand von Zeppelin’s airships flying overhead!

The weekend’s activities include the Steampunk Ball, a Victorian fancy-dress ball; a costume competition with cash prizes; steampunk machinery workshops and demonstrations; presentations and panels on both fictional and non-fiction works and applications; and a much-anticipated performance by Abney Park, the #1 Steampunk band in the nation!