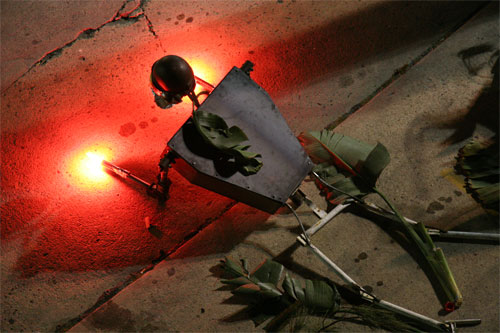 Survival Research Labs (SRL) returns to Los Angeles this Saturday, January 21st for the opening reception of a SRL gallery show at Fringe Exhibitions. Featured at the opening will be some of the Sneaky Soldiers as well as images and video from last Los Angeles show which took place in April 2005. The gallery show runs through February 25th. For more info and updates, check out the SRL website.

This exhibition will feature the newest addition to the SRL machine family- the Sneaky Soldiers- near life sized, remote controlled army of revolutionaries. Also included in the exhibition will be large-scale documentary images, and the premier of the video from SRL’s recent show in Downtown Los Angeles. This video features the first invasion of the Sneaky Soldiers. The SRL commentary on the art of war debued a Sneaky Soldier emerging from an 18-foot tall wooden Trojan horse to face danger from large-scale destructive robots enduring the pain of flame and damage through a hail of sparks and projectiles. After the fog of war was lifted from the field of battle revealing mangled wrecks of machinery, the Sneaky Soldiers were gathered to be repaired to fight again another day. Similar to a real theater of war where battle takes place, these machines and props engage in a struggle for survival. Both the machines and operators expend intense energy creating an atmosphere of immediacy and choreographed chaos. Each of the eight soldiers has an individual number and distinct battle wounds from the performance. The Sneaky Soldier has been a recurring character in many SRL performances. The new Sneaky Soldier is a major technological improvement with a steel torso enclosing a battery powered, chain driven mechanism to create a crawling action.