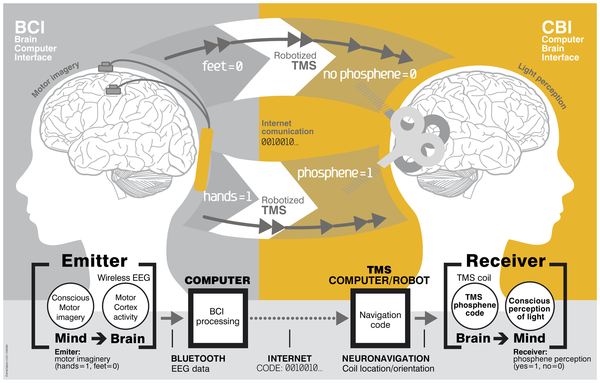 Scientists at Starlab in Barcelona claim to have successfully demonstrated the ability for subjects to communicate brain-to-brain. During the experiment, a subject in Spain was able to send the words “hola” and “ciao” translated into binary code to three people in France and one in India, monitoring thoughts of the sender through a process called electroencephalography and delivering them via transcranial magnetic stimulation. The scientists believe the research could have a profound impact on the future of communication and the world at large.

More fully developed, related implementations will open new research venues in cognitive, social and clinical neuroscience and the scientific study of consciousness. We envision that hyperinteraction technologies will eventually have a profound impact on the social structure of our civilization and raise important ethical issues.

images via PLOS ONE