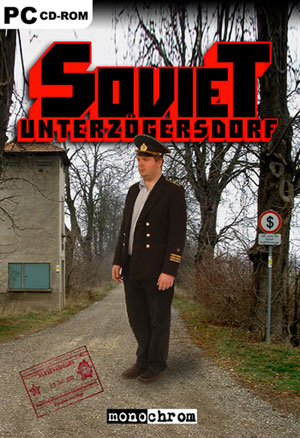 Our friends at monochrom (who were in town back in July), have just released Soviet Unterzoegersdorf, sector 1 of their adventure game trilogy which is released under a creative commons license.

Soviet Unterzoegersdorf (pronounced “oon-taa-tsee-gars-doorf”) is the last existing appanage republic of the USSR. The enclave maintains no diplomatic relationship with the surrounding so-called “Republic of Austria” or with the Fortress “European Union”. The downfall of her motherland — the Soviet Union — in the early 1990s had a particularly bad effect on the country’s economic situation.

It is a great challenge to secure survival for the small but proud confederation. External reactionary forces put the country in danger. It’s a lack of respect due to a morally corrupted and perhaps even non-existing unity of the peoples. The goal of a glorious future is almost unreachable.

But there are a handful of people who don’t give up on a vision for a better tomorrow. Let us tell you the stories of the brave citizens in the beautiful little country of Soviet Unterzoegersdorf.

It’s a story that will go into history.