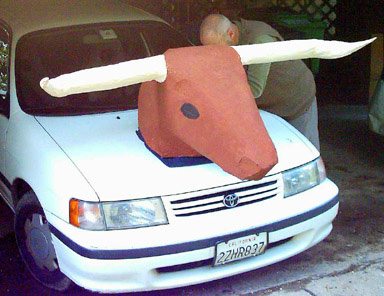 The first ever San Francisco Run with the Bulls takes place this Sunday morning, May 7th. Pseudo-Spaniards wearing red will be chased through the streets of San Francisco’s Financial District by art cars that are made to look like bulls.

8am
Clay and Drumm St.
Dress spanish or at least wear a red bandana
Bring your art cars!

So we all dress like Filty Spanish Dogs, then we taunt and run from art cars with bull horns on it, not bullhorns though that does helps with the taunting. While getting drunk. And then after we are detained and released we all go to the Power Tools Drag Race! Get it? Good, that means you’re coming!

Urban Iditarod is 12 years old and I doubt any of you were there in the beginning. YOU can say you were at the First Running of the Bullshitters 12 years from now when you’re bitching about having to donate $5 for the police escort fee and permits for the art cars! Just think of the Street Cred™!