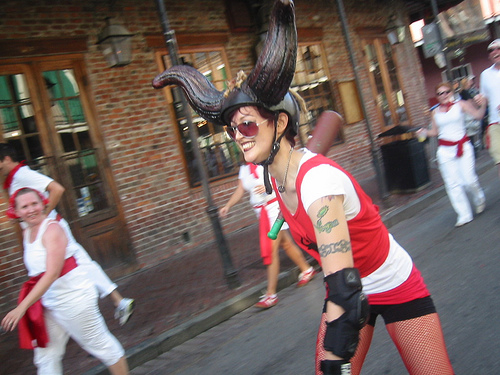 A budding New Orleans tradition, the second annual San Fermin in Nueva Orleans (SFNO) took place last Saturday. Inspired by the famous running of the bulls in Pamplona, Spain, the Big Easy version takes place in the streets of the French Quarter, and replaces the bulls with a potentially even more dangerous threat: the thirty-odd members of the Big Easy Roller Girls, NOLA’s local all-female roller derby team. 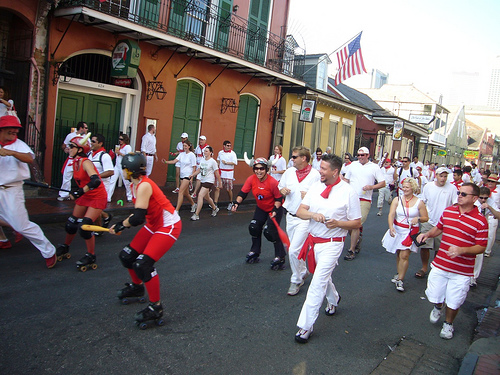 Runners dress themselves in the same white clothing and red sashes traditionally worn by the San Fermín corredors. After a prayer to Saint Fermín for protection, the runners are then chased en masse down Bourbon Street by the wiffle-bat wielding, bull-horned Roller Girls. It is a timeless test of bravery and stupidity, and just like San Fermín, few runners escape uninjured. Or at least unwiffled.

Ibeatya Bull nailed many people with [her] “Be Afraid” bat that should have been named “Be Petrified.” CHEAP Bull lost a horn goring a runner. Luvinblood Bull [lived] up to her name as she took a nasty fall, but also [lived] up to the derby philosophy and kept on skating. SmasHer Bull went samurai with two bats for more collateral damage. “This year was my first bullrun and it was awesome!” AnnihilAsian stated. “My Sponge-Bob wiffle ball bat may not have seemed intimidating to some of the runners, but after a few good whacks, Sponge-Bob proved them wrong!” The rollerbulls were followed by the less menacing but equally entertaining Rolling Elvi. [From the Big Easy Rollergirls blog]

This year’s run even featured a “toro mecánico” (a converted grocery cart) and an appearance by the Rolling Elvi, a troupe of scooter-riding Elvis impersonators.

via The Art of The Prank