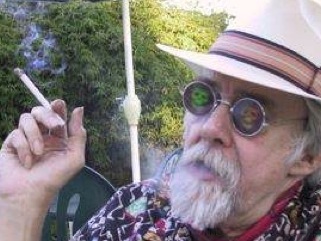 In November 2008 underground comics artist S. Clay Wilson was in an accident resulting in a serious brain injury. A Special Needs Trust has been setup to help with his recovery.

S. Clay Wilson fell and hit his head on nov 2, 2008, suffering a severe traumatic brain injury. After teetering on the brink of death for the first month, he has survived with his humor and cartooning talents intact. His eyes have suffered, as well as his neck and brain, but time and an innate orneriness gives hope to his gradual restoration.

Wilson rose to fame in the 1960s as a founding artist for Zap Comix along with Robert Crumb, robert Williams, Victor Moscoso, Spain Rodriguez and Rick Griffin. (Paul Mavrides was later added to this talented roster.) His infamous character the Checkered Demon first appeared in Zap. wilson Challenged censorship by depicting wild characters like the Checkered Demon, Captain Pissgums and Ruby the Dyke (to name a few) and made the world a more liberal environment for all artists and cartoonists.

Although he is still recovering in the hospital and beginning to draw again, (in his signature dense-pack style) his ability to earn a living in the future is in serious question. a depleted bank account and mounting bills make it imperative that his fellow man (and woman) come forward now and donate what they can to help this iconic artist develop a healthy, independent quality of life when he comes home to Lorraine Chamberlain, with whom he has lived for the past nine years.

He will need loving care for the rest of his life. Please help us do that for him.