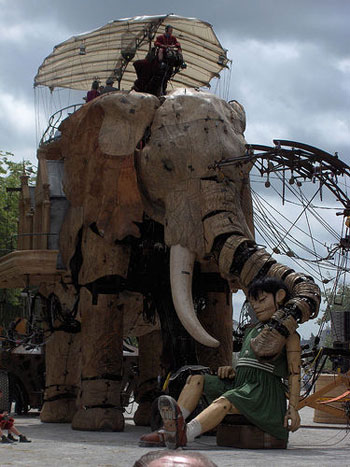 Olivier, just let us know about a fantastic parade that took place last month in Nantes, France celebrating the 100th Anniversary of Jules Verne’s classic novel “Around the World in Eighty Days”.

Here are some amazing photos of the Royal de Luxe Parade.

The link is a series of pictures of a parade that happened earlier this month in Nantes in France. This year is the 100th year anniversary of Jules Vernes the writer of “Around the world in 80 days”, and the parade was inspired by one of his stories that he wrote.

The crew that designed the parade is “Royal de Luxe” and has been making major street performance such as this one for the past 20 years. Make sure to zoom in some of the pictures to see the details of the constructions…

I found quite a few more photos on Flicker of this incredible parade.