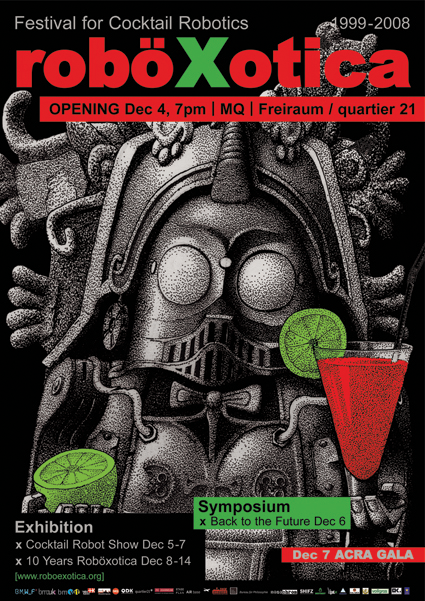 Roboexotica 2008, the 10th annual festival for cocktail robots organized by SHIFZ, monochrom and Bureau of Philosophy, kicks of this Thursday, December 4th at Freiraum in Vienna’s Museumsquartier and runs through December 14th.

Here’s a gallery of photos and video from previous Roboexotica events.

Until recently, no attempts had been made to publically discuss the role of cocktail robotics as an index for the integration of technological innovations into the human Lebenswelt, or to document the increasing occurrence of radical hedonism in man-machine communication. Roboexotica is an attempt to fill this vacuum. It is the first and, inevitably, the leading festival concerned with cocktail robotics world-wide. A micro mechanical change of paradigm in the age of borderless capital. Alan Turing would doubtless test this out.

Kal Spelletich of SEEMEN will be presenting his new cocktail robot “Sloth” at Roboexotica. Speaking of monochrom, Eddie Codel and Bre Pettis are this year’s artists in residence.