In 1998, a 16 year old Rob Sheridan, a talented artist, photographer, former creative director for Nine Inch Nails and friend of Laughing Squid, sat down for an interview with local television station K5 in Seattle to talk about the website he made that was dedicated to the infamous “Dancing Baby“.

The Dancing Baby already made an appearance on the show Ally McBeal and was making the rounds as one of the very first internet memes. While Sheridan didn’t create the Dancing Baby, he certainly played a big role in propagating it, though at the time, he was reticent to share that fact with others. Twenty years later, however, Sheridan opened up about it in a post on his Patreon page. In the rather comprehensive post, Sheridan stated that over the years he’s come feel a bit more pride about the subject, particularly since his friends were impressed with what he did. As are many others.

A couple years ago I was living in LA and quite a few of my friends were a good decade younger than me, early-to-mid-20s (I was 36 then). In career terms I’m mostly known for my time as Nine Inch Nails/Trent Reznor’s art director, which refreshingly didn’t mean much of anything to 25 year olds who were still in preschool when The Downward Spiral came out. But when I made an off-hand joke about my role in The Dancing Baby meme, I was shocked to find my friends not only knew what it was, they were blown away (one of them immediately called her brother back home: “DUDE, my friend Rob is responsible for The Dancing Baby! Can you believe that??”). As kindergarteners, their experience with the baby was a very different one than mine as a high school senior. They looked back on this grotesque cultural embarrassment as a fond piece of early-childhood nostalgia, an angle I’d never even considered before. 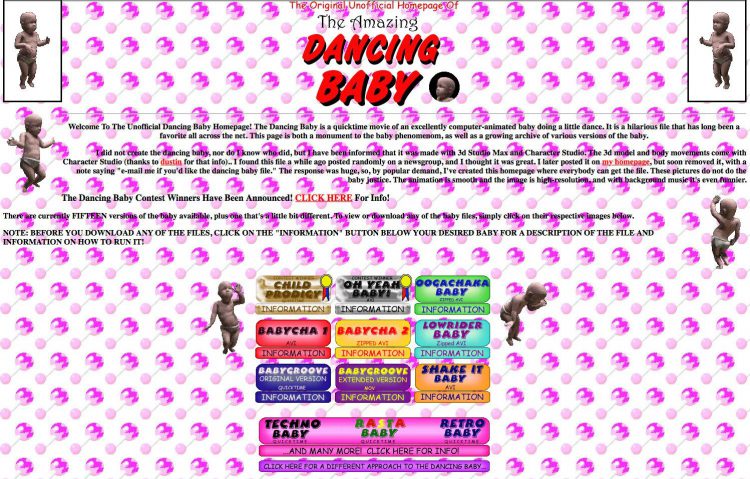