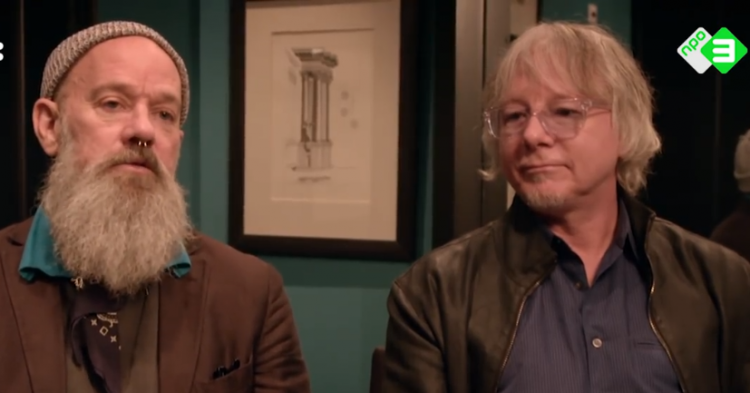 Michael Stipe and Mike Mills of R.E.M. sat down with the Dutch NTR station Top 2000 à Go-Go to discuss the meaning behind one of the bands most iconic songs, “Losing My Religion”. Frontman Michael Stipe explained from where the title and theme of the song came, how he first recorded the lyrics (almost naked) and his wonderfully peculiar dance in the music video for the song.

There’s REM walking around in a room …with mandolins and me dancing like Sinead O’Connor. She had a song called ‘Emperor’s New Clothes’ and she’s doing this crazy… like this thing that she does and I kind of took that and I remembered David Byrne from years before. Just this riveting insane movement that he had. I kind of combined them.

Bassist Mike Mills spoke a bit about how the melody came together, starting with the first few notes on mandolin.

Peter wrote it on mandolin brought it into rehearsal one day and showed us how it went. And the beauty of Peters melody I had to come up with something that anchored it and gave it enough solid bottom. It had to have a little bit of melody in it but could not
be too busy it had to be very simple and very low ending.