Before he was a rap artist, Ice Cube studied architectural drafting at (the now defunct) Phoenix Institute of Technology and learned that, “…you always gotta have a plan.” Dave Meyers directed the short, Ice Cube Celebrates the Eames, where Ice Cube talks about “the good, the bad and the ugly” of Los Angeles, and in particular, his appreciation for Eames architecture. The film was created with Pacific Standard Time for their current exhibit that celebrates every major art scene in Los Angeles from 1945 to 1980.

Ice Cube drives Inglewood blvd. describing the Los Angeles that he knows. He talks of landmarks like The Forum, Five Torches, Cockatoo Inn, Brolly Hut, and Watts Towers. He refers to the 110 as “Gangsta Highway”. Cube says coming from South Central LA teaches you how to be resourceful. The video cuts to Cube walking the Eames House perimeter, through the Eames living room, and sitting in the Eames lounge chair…Cube describes the modern, green and resourceful building design of Charles and Ray Eames. Visionaries of connecting nature and structure. Cube ends by saying “Who are these people who got a problem with LA? Maybe they mad cuz they don’t live here.” Song during intro is “A Bird in the Hand” off of Death Certificate. 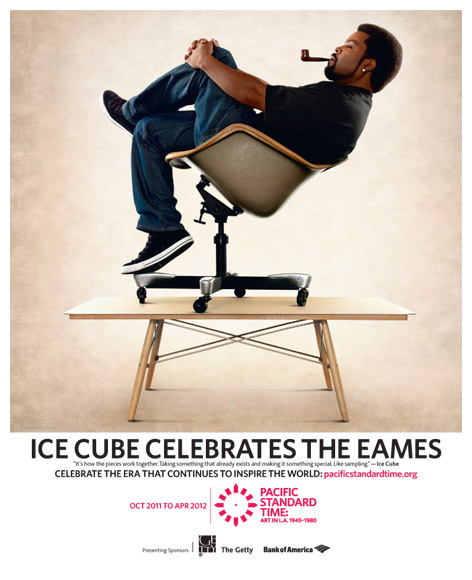 Take a tour of Ice Cube’s Los Angeles with this custom Google Map from Pacific Standard Time and Los Angeles, I’m Yours: