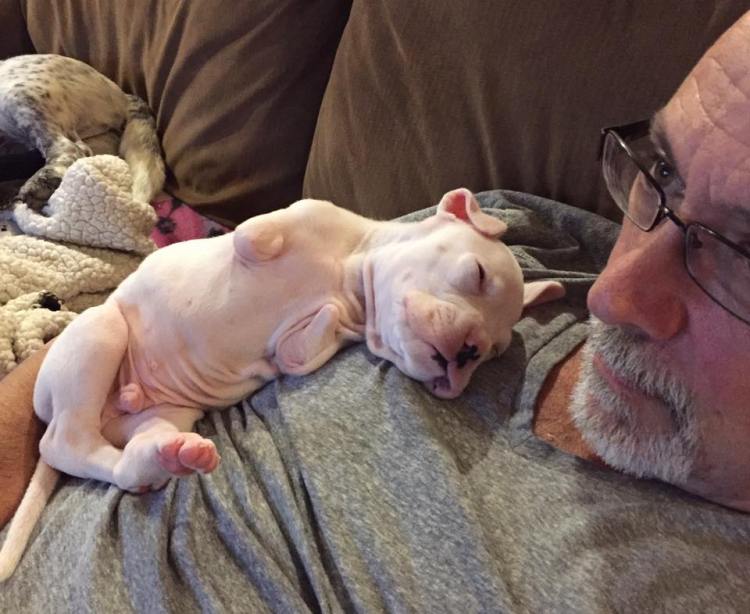 Lou Robinson, founder of the animal awareness group Warriors Educate About Rescue (WEAR), and her husband Mark Bowlin are a truly compassionate Texas couple who came to the rescue of a tiny boxer puppy who was born with severely underdeveloped front legs and an inability to survive on his own. With a full understanding of the enormous work involved with feeding a newborn puppy, the Robinsons took him home and named him Nubby Bowlin or Nubby for short.

Nubby was thriving for a while, but one day he just stopped eating. Concerned for his well-being, the Robinsons took him to the vet and learned that he had developed a esophageal abnormality that blocked food from getting to him. This left him weak and wheezing, but the tenacious little puppy persevered and recovered. While it is unclear whether Nubby will outgrow this condition because his front legs obstruct the area that needs to be x-rayed, the tenacious little puppy is back at home and clearly living a very good life with people who truly love him just the way he is.

The unknown is whether Nubby has a true esophageal abnormality or has Nubby not had a chance to develop fully yet. Puppies continue to develop just like human children once they are born and progress in age and growth. He is doing well, eating again and not burping or blowing bubbles out his nose. He has found his voice again and is complaining. …We will give him that chance. His care has been costly. His future x-ray, sonogram and endoscope will be costly. But he did not give up, he did not go quietly into the night and neither will Mark and I.