Flies Captured on Video Turning Fire Ants Into Zombies from College of Natural Sciences on Vimeo.

Texas has a fire ant problem. A fire ant is not an ant that is on fire. It’s a kind of ant. And they are bad news. The University of Texas and Texas A&M University scientists have studied the South American predators of the fire ant, and have found one called the phorid fly, which they are pinning their hopes on.

Their plan is to release phorid flies, which will lay eggs on the ants. The eggs become maggots which BURROW INTO THE BRAINS OF THE ANTS. yikes.

Oh, and then they EAT THEIR BRAINS!!!! They really do.

The ants, with maggots for brains, then become zombie ants. Zombie ants are ants that are zombies. Duh. They walk around without brains for like a month. Then their heads fall off. 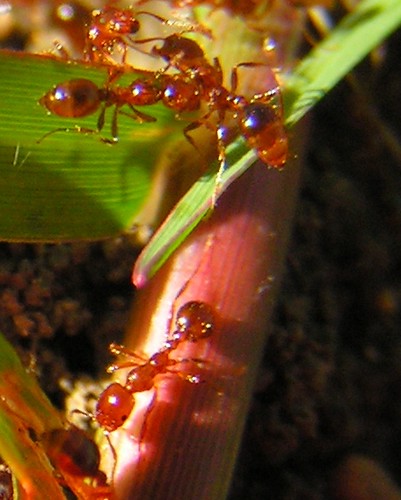 That’s not the only cause of zombie ants. This National Geographic segment explains the weirdness of the aptly named Liver Flukes (a type of tape worm) that embed themselves in ants’ brains and then control their actions, steering them into suicidal situations, so that both ant and worm will be consumed by a larger mammal and thus the fluke upgrades to its next victim.

Fire ants are not the only things in nature that are affected by mind-controlling parasites. Snails and rats also get parasites that give them suicidal tendencies. The snails, specifically, grow large tentacles which attract birds. The bird rips off the snail’s tentacles which cannot be withdrawn because of the sporocystes tubes inside. Inside the bird’s digestive tract the cercaries change into the parasite’s adult stage, which then reproduces sexually and lays eggs. Those are distributed by the bird to infect further snails, which closes the generation cycle.

I learned about this zombie ant thing via The Rachel Maddow Show (after a story about the nation of Uruguay, which recently made it legal for gays to serve in the military).