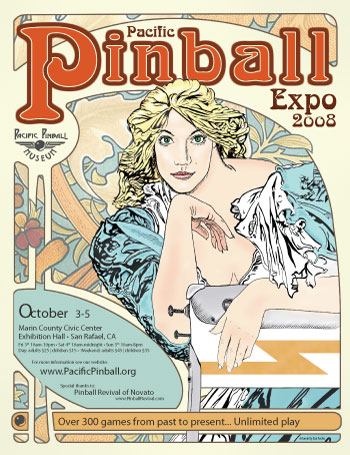 The 2nd annual Pacific Pinball Expo 2008 takes place October 3-5 at the Marin Civic Center in San Rafael. The event features over 300 pinball machines spanning a period of 100 years and it is also a fundraiser for the Pacific Pinball Museum, which is currently operating out of the Lucky JuJu pinball arcade in Alameda.

The Pacific Pinball Exposition (PPE) is focused on representing vintage and antique electromechanical and purely mechanical pinball machines and arcade games and devices. There will also be a healthy dose of modern machines to balance it out. It is our goal to bring a broader awareness of the fun and nostalgia, as well as the significance pinball has played in American and world culture through fun, interactive exhibits, clinics and lots of hands on playing of games that defined “Amusement” in the 20th century!

Here are photos from last year’s Pacific Pinball Expo by Greg Maletic, who made the documentary “TILT: The Battle to Save Pinball”.