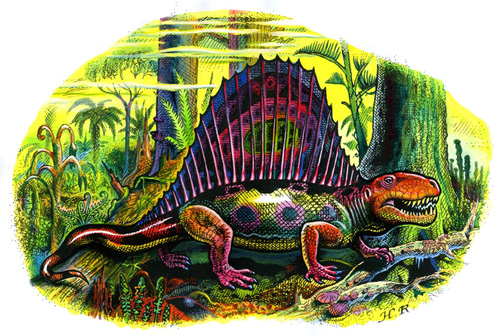 Speaking of Hal Robins, he has an upcoming solo art show in New York at Fuse Gallery in Manhattan. The show “Ornaments of Evolution”, opens this Saturday, January 20th and runs through February 24th. All of the illustrations from his new book Dinosaur Alphabet will be on display, along with some of his other artwork. If you are in New York, you should really check out Hal’s amazing work. Hopefully the show will travel to San Francisco as well so we can see it here.

If you’re going to be in Manhattan on January 20th, you’re invited to the Opening Reception for “Ornaments of Evolution,” Dr. Hal’s upcoming gallery art show at the Fuse Gallery, 93 2nd Avenue (between 5th & 6th Streets) in NYC, NY. I, Dr. Howland Owll, will be in attendance. Take the Subway F train to 2nd Avenue. On display will be all the illustrations from my book Dinosaur Alphabet in their original form, as well as some other pieces. It should be quite a party. Contact number for the gallery is (212) 777-7988.

UPDATE: Here are some photos I shot of Hal’s show while I was in New York.