While exploring the deepest waters within the Gulf of Mexico, marine biologists on the NOAA mission “Journey Into Midnight: Light and Life Below the Twilight Zone” found that they captured incredibly rare footage of a juvenile giant squid attacking the e-jelly (jellyfish bioluminescence) emanating off of crew member Edith Ridder‘s deep-sea camera The Medusa.

On Wednesday, June 19, crew member Nathan Robinson, who was tasked with reviewing The Medusa footage, discovered that a young cephalopod had stopped by for a visit at their location just 100 miles south of New Orleans.

Nathan started looking at the downloaded videos. He found the usual shrimp and other small animals that we had been seeing on the first four deployments. And then he saw it, a large tubular animal off on the corner of the screen, looking as if it was hunting the e-jelly. The next short video showed the same thing. Then, in the third video, the tubular animal revealed an enormous set of arms and tentacles coming in to attack the e-jelly. 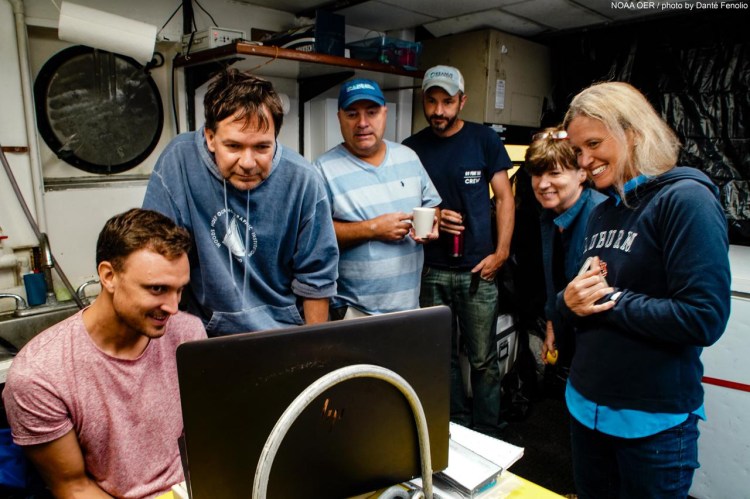 The entire crew was amazed by this sighting, although they soon needed to turn their collective attention to an oddly timed lightning strike that hit the ship.

What happened next was something that we truly never expected. About 30 minutes after Nathan first saw the squid on the screen, lightning struck the ship. …Those of us on the main deck immediately ran to the Medusa computer to see if it was destroyed. Losing the most amazing video you’ve ever seen just 30 minutes later would have been beyond ironic. Luckily the computer was safe.

This amazing footage marks a rather fortunate start to Cephalopod Week 2019!

We’re submerging again for eight days of celebrating the mighty mollusks of the ocean.