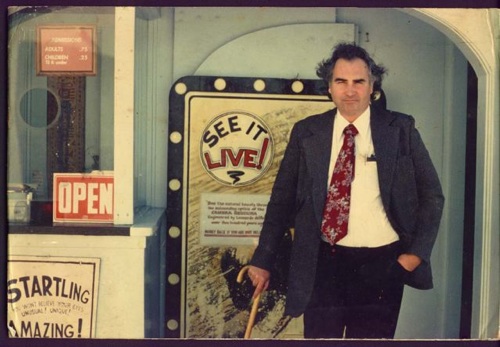 David Warren died in a East Bay hospital on January 2, 2009. This is the same day of the month, exactly 32 years after Dave, along with Adrienne Burk, Gary Warne and Nancy Prussia founded The San Francisco Suicide Club. The notion struck them after a terrifying adventure where they clung desperately to a heavy barricade chain atop the seawall under the Golden Gate Bridge at Fort Point as thirty foot waves crashed down on top of them. Later, over tea and pastries the four friends decided to start a club where they would encourage members to “live each day as though it were their last” by creating events and experiences that would challenge their deep personal fears, expand their knowledge and understanding of their world and those in it AND be hella fun.

Dave was a carnival magician and barker as a young man and retained a lifetime interest in the seedy world of carneys, amusement parks and sardonic magicians. In 1975, two years after the magical and (by the end) seedy amusement park Playland at the Beach was demolished Dave founded Playland Research Corporation. PRC was dedicated to collecting and archiving photos, film, personal interviews of and about the classic attraction out at Ocean Beach that served as a magnet for young and old alike.

His surviving collection was donated to Playland-Not-At-The-Beach a wonderful museum in El Cerritto curated by Richard Tuck.

In 1978, along with Chris De Monterrey, David restored and operated the Giant Camera Obscura below the Cliff House at Ocean Beach. This spectral attraction, one of fewer that half a dozen surviving in the world, was originally envisioned by Leonardo DaVinci and became a popular type of attraction at scenic tourist spots during the Victorian era. 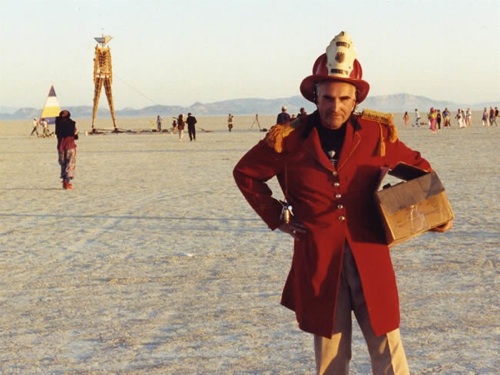 The Suicide Club morphed into The Cacophony Society in the mid 1980’s. Cacophony helped birth The Burning Man by taking the Baker Beach bonfire to the Black Rock Desert in 1990. David lighted the first man in the desert by blowing a 15′ flame onto it.