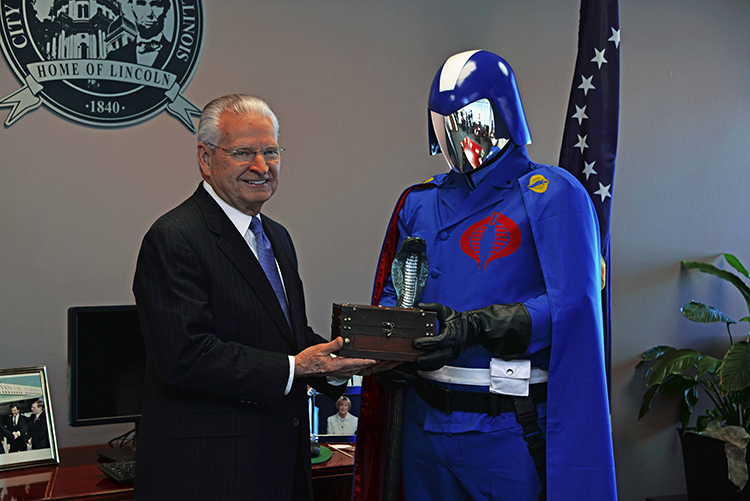 Springfield, Illinois mayor J. Michael Houston recently presented Cobra Commander, G.I. Joe super villain and leader of the organization known as Cobra, with a key to the city to celebrate the upcoming International G.I. Joe Collectors’ Convention being held there. This could mean trouble for a lot of the Joes who attend the fast-approaching convention.

In an eloquent and moving speech, the cobalt-clad commander-in-chief detailed Cobra’s vision of the future and its goals to bring about a better tomorrow for all those who support their cause. Said Cobra Commander “Springfielders near and far, I accept your Mayor’s generous gift. And let it be known that I too bring a gift for every man, woman and child of this city that is so near and dear to my heart; an invitation to join with me. Join Cobra!”

The Commander’s visit is but a forerunner for more things Cobra coming next month. The second week of April will see swarms of G.I. Joe and Cobra fans – some wearing blue uniforms with crimson cobra-shaped emblems – descend on the Prairie Capital Convention Center for the official G.I. Joe Collectors’ Convention, G.I. JoeCon, being held from April 9 – April 12.

Fun Pub Video posted a video in which Cobra pops up everywhere in the city of Springfield: