Linguists at the Endangered Language Alliance (ELA) have spent the past ten years documenting the wide array of languages spoken within New York City and found that an amazing 637 languages and dialects are found within its five boroughs. With these remarkable results in hand, the organization created a beautiful map showing in which neighborhoods these languages are predominantly spoken. The project focuses on lesser-known languages that are being kept alive through oral tradition.

The map is committed to representing many of the smaller, minority, and Indigenous languages that are primarily oral and have neither public visibility nor official support. It represents ELA’s ongoing effort to draw on all available sources, including thousands of interviews and discussions, to tell the continuing story of the city’s many languages and cultures. The patterns it reveals — the clustering of West African languages in Harlem and the Bronx, a microcosm of the former Soviet Union in south Brooklyn, the multifaceted Asian-language diversity of Queens, to name a few — only hint at the linguistic complexity of a city where a single building or block can host speakers of dozens of languages from across the globe.

The ELA has released these maps to tie in with the U.N. declaration of 2019 as the International Year of Indigenous Languages and ahead of the 2020 U.S. Census.

Prints of the map are available for a donation to ELA.

Based on a decade of work, ELA has mapped 637 languages and dialects to nearly 1000 significant sites around the metropolitan area, including neighborhoods, community institutions, restaurants, and other locations where there is, or was, at least one speaker. We believe this is the first detailed linguist-produced map of the city. We are releasing it in December 2019 to coincide with the UN-declared International Year of Indigenous Languages and the lead-up to the critical U.S. 2020 census. 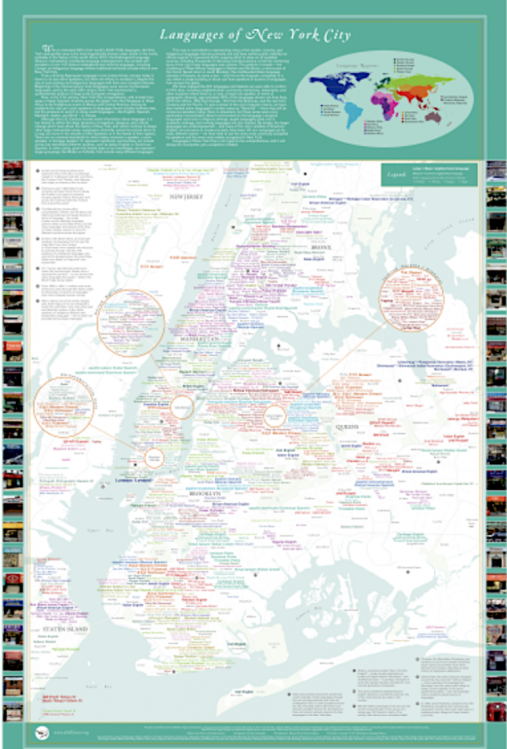