Marcin Wichary, a designer, writer, and typographer in San Francisco gave a fascinating remote talk in which he addresses the film technique of rotoscope looping. This time-bending process was deftly demonstrated by Michel Gondry in the video for the Kylie Minogue song “Come Into My World”. Wichary notes that in the video, Minogue takes several laps around a city block until she catches up with herself.

He also uses the video for the Pet Shop Boys song “Opportunities (Let’s Make Lots of Money)” and the short film “Tango” by Zbigniew Rybczynski to further demonstrate his point.

I knew I wanted to include Come into my world, Opportunities, and Tango. I quickly created a spreadsheet to try to map it out.

As Wichary is explaining what’s happening in the video, another version of himself comes into play and starts the talk over. After that, a third and fourth version of himself does the same, hence the name that was given to his talk: “Four Laps”.

I originally planned to have five laps — one for each section — but this would leave less than a minute for each one. This felt tight time-wise, and also I didn’t know if I could make myself small enough using my camera/lens. So, I ended with four laps, 70 seconds each, with a little room at the end to breathe. This coincidentally was exactly the structure of Come into my world, except that the video’s laps were 61 seconds each. 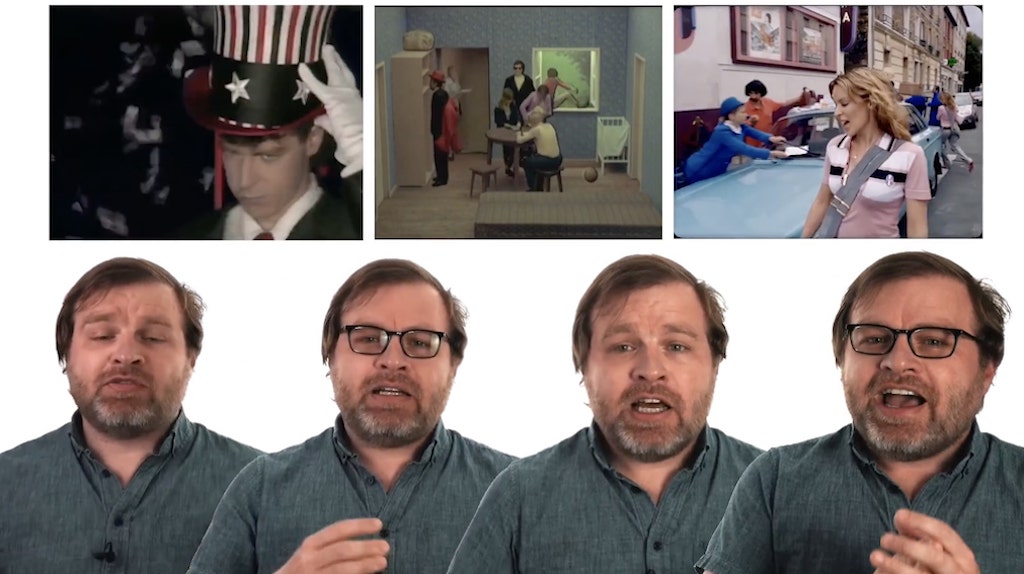 This remarkable talk took a great deal of practice and timing, as Wichary shared in his bloopers video.

I started practicing in front of the camera as soon as I could, seeing how much time I need for certain things (e.g. putting the jacket on), and how do the gestures feel.

Here are the videos Wichary used in his talk.