A quick post about a new play featuring yours truly Mikl-em, regular Laughing Squid contributor and man-about-town. Left-Handed Darling is a new original play which recently premiered in San Francisco at The EXIT theater. Set in the colorful and disturbing world of 1930’s carnival sideshows, the play is inspired in part by Tod Browning’s classic film Freaks. I play the carnival barker (or “outside talker“), named Sugarchurch.

For fun I started a Tumblr blog called Sugarchurch on the show and various sideshow-related stuff. Below is a glimpse of the lighting and set for the show. I’ve put up a few more images on Flickr. photo by Richard Board

Left-Handed Darling is a sensational and twisted story, a Creepshow tragedy (dark with comedic tinges) set in 1930’s dust bowl America, amid Vaudeville & carnival characters and scenes. The script includes well-researched historical details and remarkably poetic language. Even more remarkable as it is the author’s first play; Nikita Schoen (pictured below) wrote this play as part of the New Writer’s Program, a year-long mentorship program run by Foul Play Productions. 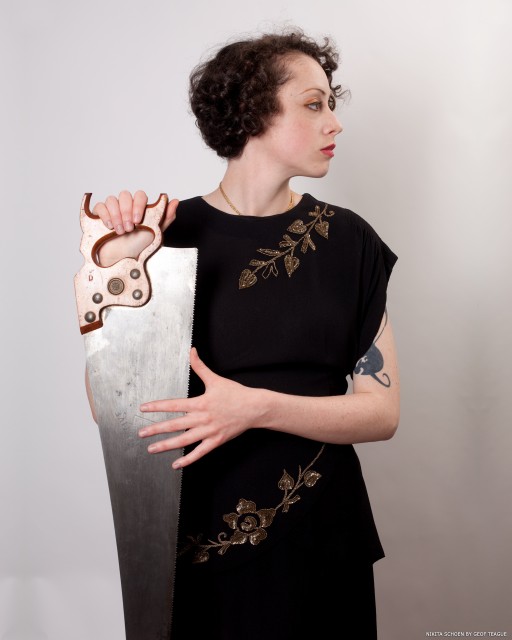 We’ve got a great team of actors and designers who’ve been working hard on this show. It runs Fridays and Saturdays through August 13th at The EXIT in San Francisco. Tickets are on sale now. We also were loaned some vintage carnival sideshow artifacts, like the picture board of attractions shown below, from the collection of David Apocalypse. There’s a Kickstarter campaign to help fund the play and the New Writers Program. It’s in its final few days, and it will help to fund both Left-Handed Darling and future shows by other local, emerging playwrights.

Here’s a clip from Browning’s Freaks: