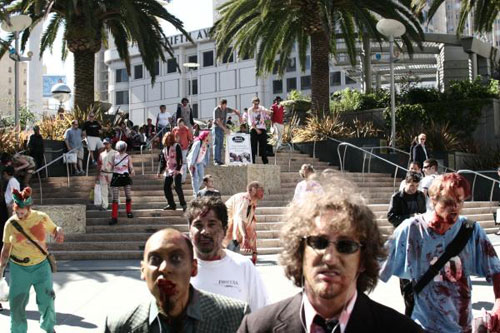 The zombies continued their rampage and they made it to the trolley cars of Powell street. At this point, I was separated from a number of the zombies for my own safety. They had attempted to eat me despite my camera blocking their pathetic attempts. I ran for my life and the group split in two. They followed to Union Square where they continued to eat innocent bystanders. I got word from a friend being chased by the other zombies that she was safe for the moment at Powell Street station. I ran to distract the other zombies in hopes they would leave the other poor people alone. When I made it back to the station, I found that I was trapped. My friend had been caught and she was turned. I ran for my life.

UPDATE 1: More zombie photos are being posted as they come in.

UPDATE 2: Derek Powazek shot some great photos of the zombie horde as well, including their invasion of the San Francisco Apple Store.