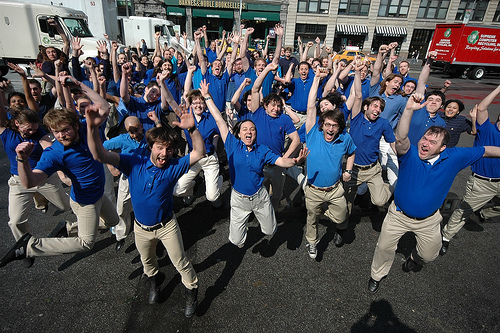 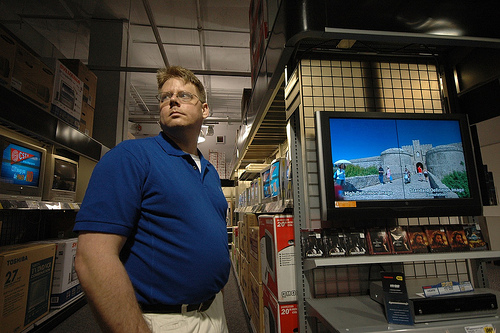 Improv Everywhere is a group of pranksters based out of New York City who has been “causing scenes” in public since 2001. Their latest mission took place last month when 80 of their agents showed up at the Best Buy store in Union Square wearing blue polo shirts and khakis, which of course caused mass confusion, along with the occasional electronics sale. Here’s their full mission write-up complete with photos, video (from hidden cameras) and first-hand accounts.

We met at Union Square North at 3:30 PM. Around 80 agents showed up, most them looking like wonderful Best Buy employees. More than a few came dressed in navy or teal, but with the belt and the khakis they still looked employee-like. After everyone arrived I explained the mission. The first step was for everyone to throw their newspapers away. The instruction to bring a newspaper was a red herring meant to throw people off the scent of the mission’s true nature. I then revealed the plan, “We’re heading up to the Best Buy on 23rd Street. We’ll enter the store one by one. Once inside, spread out and stand near the end of an aisle, facing away from the merchandise. Don’t shop, but don’t work either. If a customer comes up to you and asks you a question, be polite and help them if you know the answer. If anyone asks you if you work there, say no. If an employee asks you what you’re doing, respond ‘I’m waiting for my girlfriend/boyfriend who is shopping elsewhere in the store.’ If they question you about your clothing, just explain that it’s what you put on when you woke up this morning and you don’t know any of the other people dressed like you.”