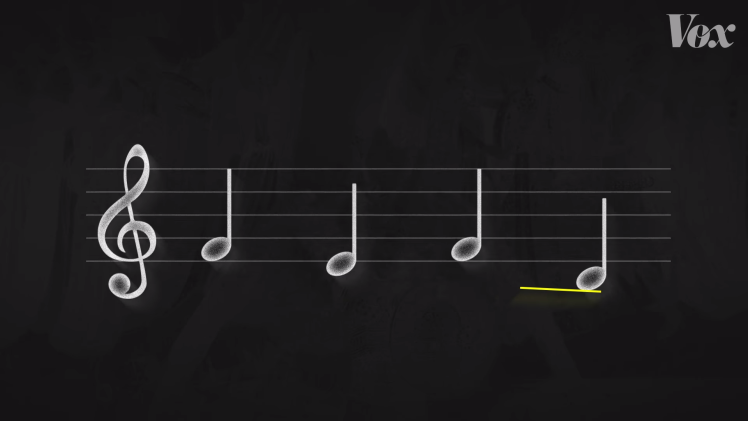 Vox producer Bridgett Henwood takes a look at the “Deus Irae” (God’s Wrath), four simple notes within the Dorian minor scale that are arranged in such a way to signal death or danger in films. The meter of this phrase also causes an odd discomfort upon hearing, lending it to be interpreted as ominous.

As films started incorporating sound, the Deus Irae kept being used as a shorthand for something grim. Like in ‘It’s a Wonderful Life’ and ‘Star Wars: A New Hope’. But perhaps its most iconic use is in The Shining. …The phrase has become so culturally ingrained that even a modified version — like the theme to ‘The Exorcist’ — or a shortened version, like the ‘Nightmare Before Christmas’ can suggest the same scary feeling.

This musical phrase is thought to have originated with the Franciscan Monks. It was later borrowed by the Catholic church to mourn the dead. Various composers have also incorporated and this phrase into their art.

Over the next few hundred years, the Church’s influence spread considerably, and the Day of Wrath started popping up in works of art outside the church, like Mozart’s 1791..“Requiem,” influenced by the music of funerals.