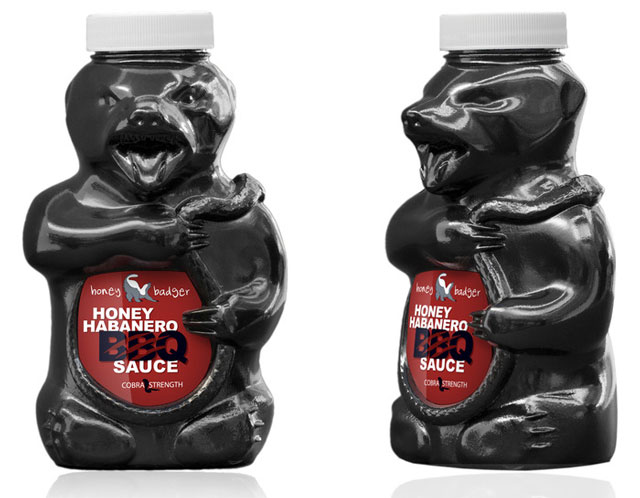 The San Francisco-based Honey Badger Sauce Company has concocted Honey Badger BBQ Sauce, ‘badass’ barbecue sauce made with honey & habanero chili peppers that was inspired by the Honey Badger internet meme. Each of the sauce’s custom bottles feature a “snarling Honey Badger locked in combat with a deadly cobra…” A fundraising campaign has been started on Kickstarter so that the sauce can be mass manufactured in the United States. Kickstarter backers can order the limited-edition ‘triple cobra strength’ sauce or the 24 Carat gold refillable bottle that is part of their annual Golden Badger Club.

Honey Badger Honey Habanero BBQ Sauce combines the tastes of real honey and freshly chopped Habanero chilli peppers in a tangy barbeque sauce ready for your burgers, ribs, chicken and even king cobra! At first encounter the unique spices and honey flavour hit your taste buds, not too sweet like most sickly sauces out there, but just right to combine with what is coming, the slow build of the habanero heat! The heat builds to a level that will cause the uninitiated to raise their brows, exhale through pursed lips, and exclaim “wow that’s hot, but I like it”* whilst the pepper connoisseur will nod in approval, and state “now that’s what I want BBQ sauce to taste like”… It really is COBRA STRENGTH.