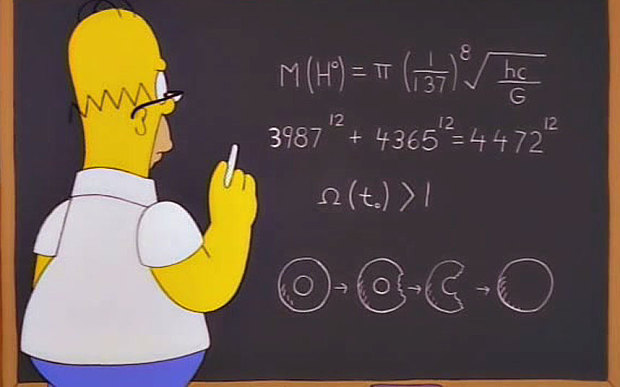 In his book The Simpsons and Their Mathematical Secrets, author Simon Singh claims that in the 1998 episode of The Simpsons titled “The Wizard of Evergreen Terrace“, the character Homer Simpson nearly calculated the mass of the Higgs boson “God particle” more than a decade before it was discovered.

The Higgs boson was first theorized in 1964 by a team of physicists including Peter Higgs, for whom the particle was named. The Higgs boson and the Higgs field are believed to be what gives certain fundamental particles mass. Scientists at the CERN Large Hadron Collider tentatively confirmed their discovery of the Higgs boson in 2012. They calculated the mass of the particle to be between 125 and 127 giga-electron volts (GeV).

Homer’s equation, when solved, gives a mass of 775 GeV, more than five times the actual mass of the Higgs boson, but as Singh explains in the book it was, “not a bad guess, particularly bearing in mind that Homer is an amateur inventor and he performed this calculation fourteen years before the physicists at CERN, the European Organization for Nuclear Research, tracked down the elusive particle.”

The full chapter of The Simpsons and Their Mathematical Secrets that deals with the specific equation in question can be read in a post by Singh on Boing Boing.