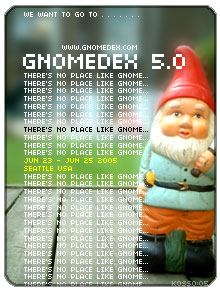 So, it’s official, Laughing Squid is going to Gnomedex 5.0.

Gnomedex is a 3 day web technology event organized by Chris Pirillo that takes place June 23-25 in Seattle. I first met Chris back at Webzine 2000. At the time, we was living in Iowa running his blog Lockergnome, which is where the “gnome” in Gnomedex comes from. Maybe I can talk Chris into coming out to San Francisco in September to join us again at Webzine 2005.

The primary focus of Gnomedex is blogging, podcasting and other forms of online publishing and distribution. If you are not familiar with podcasting, it’s a way of distributing audio files through RSS, which then can be downloaded and played on a portable mp3 player (ie. iPod, hence the name podcast). Gnomedex is a big event in the podcasting world, in fact last year’s Gnomedex was one first places that bloggers were introduced to podcasting. Now a year later it has become a really big deal and major media outlets, like ABC, are starting to offer their own podcasts. At this year’s Gnomedex, two of the pioneers of podcasting, Dave Winer and Adam Curry, are the keynote speakers.