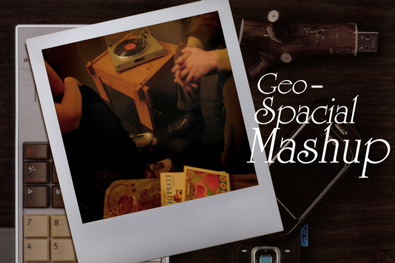 On March 21st Ar+Space will be turning San Francisco into a giant jukebox with their citywide Geospatial Mashup, where vinyl records will be spread through the city via bike messengers. The project is being orchestrated by local singer-songwriter bernadette, who will headline the event on a turntable at Cafe du Nord.

Hundreds of used vinyl records spread across San Francisco by swarms of bike messengers will spin simultaneously on Wednesday, March 21st, at 9:56 pm, in a citywide musical mashup. Played by amateur DJs on secondhand turntables in neighborhoods from Chinatown to the Mission, the sound will last for four minutes, the length of a standard single. Since nobody will be in a position to hear all of the records at once, the overall composition will be audible only to the city’s communal ear. “It will be a collaborative act, both the playing and the listening,” says local rockstar/artist bernadette, who will headline the mashup on a turntable at Cafe du Nord, where her eponymous band will be performing that evening. Moreover, because the vinyl will be freely distributed to anonymous takers on street corners and in parks over a seven-day period preceding the mashup, the exact mix of music will never be fixed, potentially including strains of the Beatles and Ella Fitzgerald, Madonna and Mozart. “This geospacial mashup will be as eclectic as the city itself,” comments consulting conceptual artist Jonathon Keats. “It’s the first performance by and for the collective conscious.”