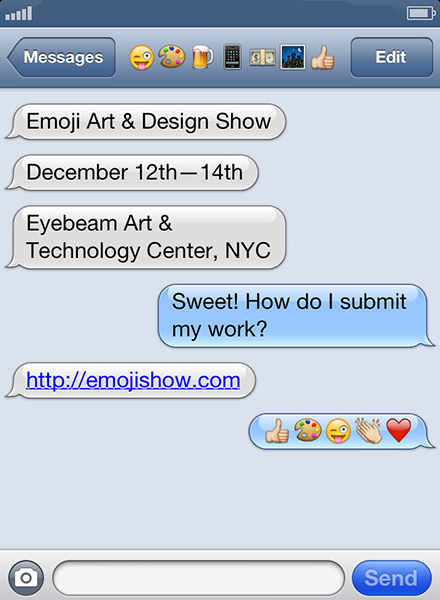 The Emoji Art & Design Show is a themed art show about emoji that will run from December 12th to the 14th at the Eyebeam Art & Technology Center in New York City. The show is currently accepting submissions “ranging from net art, to painting and sculpture, video and performance” on its website.

In today’s visually oriented culture, which increasingly communicates through images rather than text, emoji comprise a kind of “visual vernacular,” a language that conveys humor, ambiguity and personality as well as meaning.

This visual form of communication isn’t necessarily new—from cave paintings, to hieroglyphics, to religious and mythological symbols encoded in traditional painting and sculpture, we’ve been communicating through images since the dawn of mankind—but its dominance in culture today, especially among millennials, seems to indicate a greater shift in our approach to self-expression.