When a curious motorist named Dave stopped to capture video of free-roaming cows as they played in a pond, he noticed that one cow was pacing back and forth and loudly lowing in desperation. When he got closer, he saw that the cow was trying to lead him to a spot next to the property fence. Dave took a look and saw that a tiny newborn calf was curled up on the other side of the fence.

Though Dave was concerned that the mother would attack him if he touched the baby, he cautiously approached and gently pushed the calf under the fence towards the relieved mother. After giving the calf a good once-over, the mother expressed her gratitude with a long, appreciative look.

As Dave walked away from the fence, she gave him a long look that seems to convey understanding and relief that this stranger had helped her baby. She led him off into the meadow and he was able to nurse right away. The farmers, who had been on an errand while this was happening arrived as she was leading the calf away. 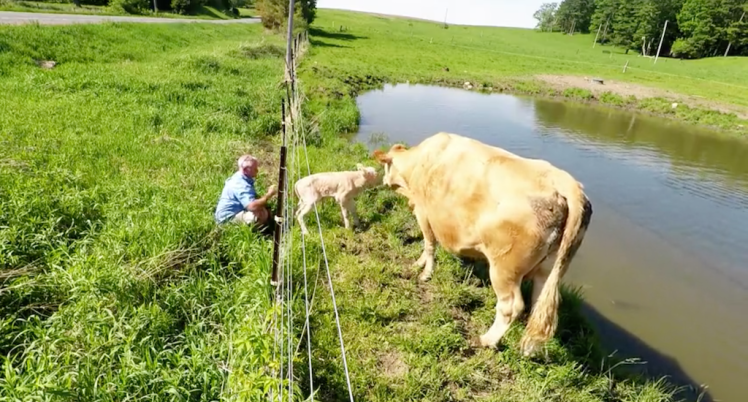 Dave stayed to help the farmers tag the newborn. Both mother and calf appeared to remember Dave from earlier in the day.

Unbelievably, the little calf saw Dave and wandered up to him curiously, seeming to recognize him from earlier in the afternoon. Flo also seemed to remember Dave and she gave him a long look before wandering off behind her baby.