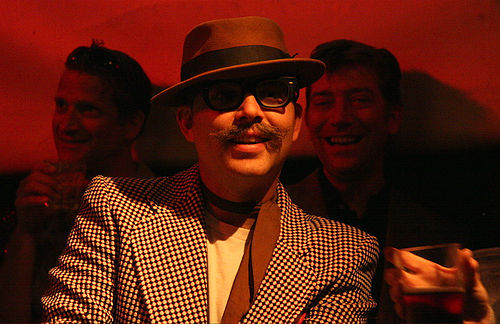 Chicken John’s Christmas Show takes place tomorrow night, Saturday, December 24th (Christmas Eve), at 12 Galaxies in San Francisco. The show starts at 10pm and is $5 to get in.

17 years ago, Chicken John started a tradition. Family holiday for people without families. On Christmas Eve, no one should be alone. So he threw a show. Here’s how it works: everyone brings a stupid gift or two, and puts it under the tree. Chicken hosts a game show that everyone in the club plays for like 3 minutes. Everyone wins. You open the gift that you select for winning right there on stage. When we run out of gifts, the show is over. Last year the show was 3 1/2 hours long. It was either the greatest thing anyone has ever seen or the worst show on Earth. This year promises to be worse. We invite you to endure:

A CHAOS CHRISTMAS CAROL with: Chicken John and friends

Join Dr. Hal, KROB, Jascha, Phx and the Odeon Bar gang as we decimate Christmas. Everyone gets a present.

Opening act: Knees and Elbows featuring Janay Growden and an all star cast.