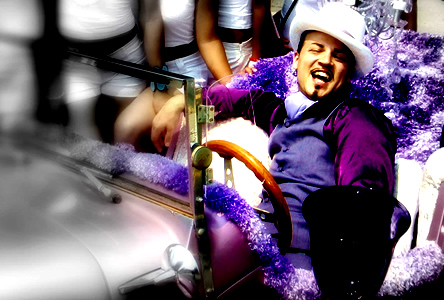 My friend Justin Fornal or Baron Ambrosia as he is known of to the gourmands and gangsters of The Bronx, NY is a walking breathing action figure. When he’s not filming sword battles by space alien pirates on the very top of the towers of some of NYC’s greatest bridge spans or saving damsels in distress, he is cruising The Bronx looking for the very best cuisines at the most obscure eateries. And DAMN he looks good doing it!

Justin’s show Bronx Flavor is unparalleled in my estimation as a uniquely entertaining and edifying video encyclopedia of fabulous food and culinary excess. He started it after becoming annoyed at Zagats foolish dismissal of The Bronx and Queens and their patchwork quilt of fabulous eateries. His TV Network, BronxNet has given him a free hand in creating the show and he really uses it. I’ve never seen anything like it.

The next time I’m in NYC, I’m bypassing Barolo Restaurant in Manhattan and The River Café in Brooklyn (like I would ever eat at a place that has $35 salads!) and heading straight for The Bronx and Deshi Bazaar on White Plains Rd, or maybe World of Taste Seafood & Deli for a killer Pho’.