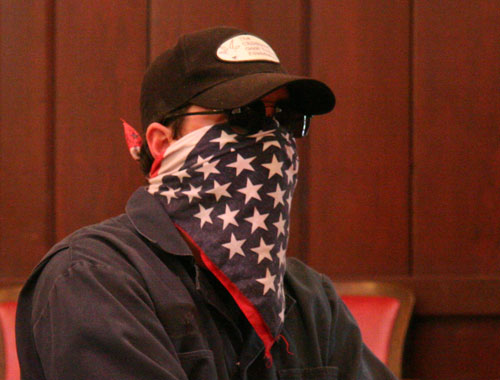 Billboard Liberation Front founder Jack Napier and chief scientist Milton Rand Kalman are going to be interviewed tonight (Friday, February 3rd) from 11pm to 12pm by Irene McGee, host of NoOne’s Listening, which in addition to the podcast, is now being featured on 106.9 FREE FM (both broadcast and streaming online). The BLF and Irene will be joined on the show by Miriam Smith, a professor of media ethics and entertainment industry lawyer.

Culture Jamming – The act of transforming Existing Mass Media producing
negative commentary about itself. Example: every street sign in SF was
changed from Bush to Puppet on the day of the inauguration.

They are coming in disguise to protect their identities (well not Prof
Smith), although I thought since radio didn’t have moving pictures they
would be adequately protected by the shortcomings of the medium… Check
out the site:

UPDATE: According to the BLF website, there is now a podcast archive of the show on NoOne’s Listening.