Not sure how I missed the wonderfully ridiculous “deadpan mockumentary” of meta-Godzilla-esqueness that is Big Man Japan. It debuted in Japan in 2007 and was released in the US in 2009 to enthusiastic reviews in The La TImes and The New York Times. In fact this looks right up there with Ika resuraa (aka “The Calamari Wrestler”), which Scott covered years ago. Clearly this film would be improved by more cephalopods, but what film wouldn’t be?

Hitoshi Matsumoto, a comedy giant in Japan, took on the Promethean task of writing, directing & starring in his debut film, and apparently nailed it in a big way. His followup Symbol came out in 2009, but has yet to be released in the US.

A middle-aged slacker living in a rundown, graffiti-ridden slum, Daisato’s job involves being shocked by bolts of electricity that transform him into a stocky, stick-wielding giant several stories high who is entrusted with defending Japan from a host of bizarre monsters.

But while his predecessors were national heroes, he is a pariah among the citizens he protects, who bitterly complain about the noise and destruction of property he causes. And Daisato has his own problems – an agent insistent on branding him with sponsor advertisements, an Alzheimer-afflicted grandfather who transforms into a giant in dirty underwear, and a family who is embarrassed by his often cowardly exploits.

A wickedly deadpan spin on the giant Japanese superhero, BIG MAN JAPAN is an outrageous portrait of a pathetic but truly unique hero. 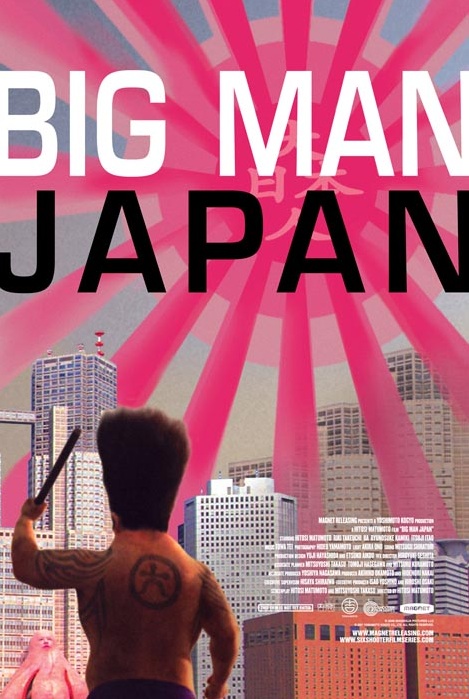