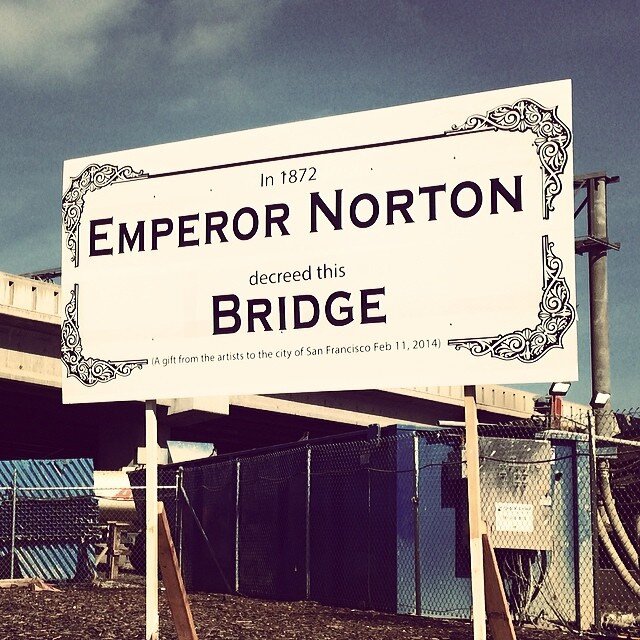 On Tuesday the western span of the San Francisco–Oakland Bay Bridge was officially named after former San Francisco Mayor Willie Brown, much to the displeasure of petitioners who have asked that the bridge be named in honor of famed San Francisco eccentric Emperor Norton. To voice their displeasure, late Monday night an anonymous group of artists installed a large sign near one of the bridge’s San Francisco on ramps with the message: “In 1872 Emperor Norton Decreed This Bridge.” An anonymous participant in the project explained to SF Weekly why the sign was installed:

This plaque is a historically accurate gift to San Francisco, recognizing the origins of the Bay Bridge and honoring Emperor Norton’s vision and unique character. The date was selected to coincide with the controversial naming of the old Western span for Willie Brown. During Mr Brown’s mayorship in San Francisco his policies lead to wide-scale displacement of many cultural groups as well as great loss and abuse of the arts communities. So as we, the working class, teachers, artists, service industries, and families are displaced, the bulk of which are moving East, we’ll have to see the name of one of those responsible emblazoned on the bridge while we leave.

via SF Weekly The Snitch