NASA has unveiled an amazing 360-degree infrared panorama of the Milky Way Galaxy stitched together from over two million infrared images taken by NASA’s Spitzer Space Telescope over the past 10 years. The 20-gigapixel panorama, which is interactive and zoomable, was created from the Galactic Legacy Infrared Midplane Survey Extraordinaire (GLIMPSE) projects and uses the WorldWide Telescope program from Microsoft for visualization. Though the image includes only about three percent of our sky, it follows the band of the Earth’s sky that includes the plane of the Milky Way and therefore captures “more than half of all the galaxy’s stars.”

“If we actually printed this out, we’d need a billboard as big as the Rose Bowl Stadium to display it,” said Robert Hurt, an imaging specialist at NASA’s Spitzer Space Science Center in Pasadena, Calif. “Instead, we’ve created a digital viewer that anyone, even astronomers, can use.” 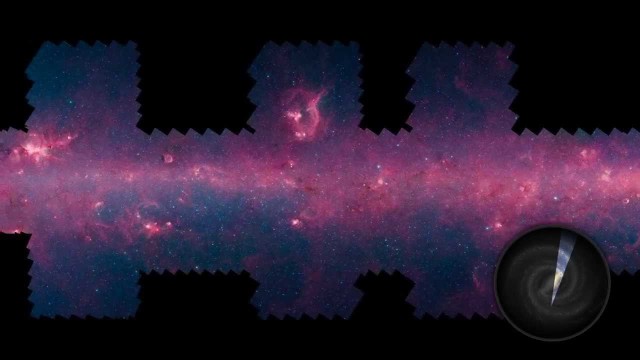