Mike Peterson of Dolphin Quest Hawaii (a swim with the dolphins program at the Hilton Waikoloa Village) captured this amazing underwater footage of Keo the dolphin giving birth to her female calf on September 17, 2012. A contest to name the new calf will happen at the Dolphin Quest Facebook page.

It’s the first baby for proud dolphin mom, 12-year-old Keo. Dolphin Quest trainers were in the water during the dolphin birth to observe and comfort the new dolphin mom. Dolphins Pele (the new baby’s grandmother) and Noelani (the baby’s aunt) were also in the Dolphin Quest lagoon to keep Keo company.

The baby, a female calf, and mom are both well and wonderful. The baby dolphin began nursing within four hours of birth. About 50 people gathered around the Hilton’s Dolphin Quest lagoon to witness the rarely-seen event. Keo was in labor for approximately one hour. 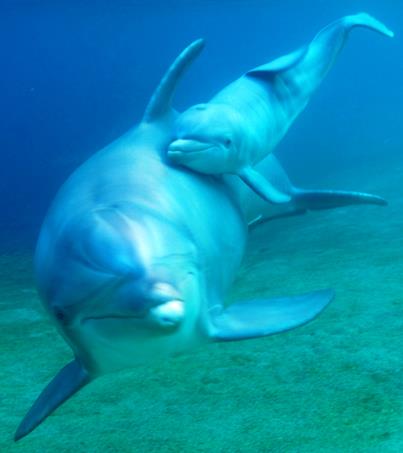