Quirky food host Alton Brown demonstrates the proper art of sabrage, the act of opening bottle of champagne with a saber.

Start with a bottle of french champagne because they use thicker glass and that’ll make for a cleaner annulus or ring of glass. Take the bottle to be sabered and turn upside down in ice for at least 10 minutes. You want the neck as cold as possible. Meanwhile we’ll review some physics. Due to a secondary fermentation inside the bottle, Carbon dioxide produced by live yeast builds up pressure typically in the range of 5 to 6 atmospheres, that’s 90 pounds of pressure per square inch which translates to 620 kiloPascals. In other words, a corked champagne bottle is a bomb waiting to go off. The point is focus and control the blast to get at the stuff inside. This can be done by applying a sharp blow here where one of the bottle seams meats the lip of the bottle or annulus…stop snickering! This is serious business. Said blow must be focused, resulting from a smooth, rapid movement of a metal object. I’ve seen it done with a lawn mower blade but why use such a rare object when you’ve got a saber hanging around? 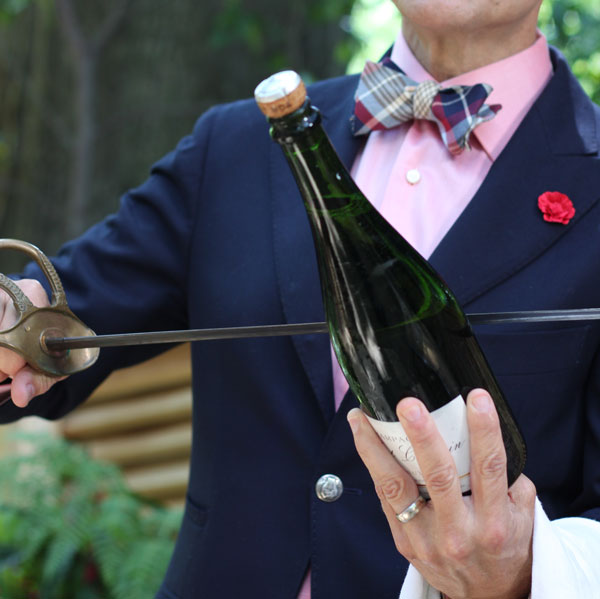